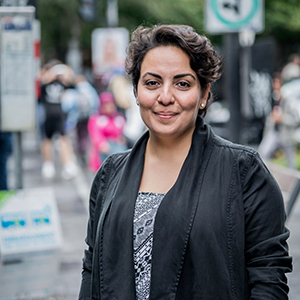 Emma Haraké completed her Masters in Art Education at Concordia University. Her creative research project focused on the meaning given to different objects by Arabic-speaking immigrants in Montreal. Through this project, Emma Haraké not only gave voice to the Arabic-speaking communities of Montreal, but also allowed this voice to be disseminated through the creative and collaborative activities she conducted around this project. She organized an exhibition entitled Mumtalakat around this project at the Leonard & Bina Ellen Art Gallery in 2020 and another at the Georges Vanier Cultural Center in 2018. She has also contributed to various projects aimed at opening the doors of the Leonard & Bina Ellen Art Gallery to the Arabic-speaking communities of Montreal, notably as a coordinator and cultural mediator as well as a guest curator for the same gallery.

Emma Haraké has also contributed to strengthening the ties that CHORN has developed over time with many other communities as CHORN’s community coordinator and mediator for 3 years (2019-2022). During this time she has worked hard to build bridges with different communities, whether it was through the organization of the last three symposia on emerging research in oral history, digital storytelling, and creative practice, or through the multiple events she has helped to organize.

Since joining the center as a community affiliate in 2017, Emma Harakéa has played a central role in developing and strengthening CHORN’s connections with diverse communities.