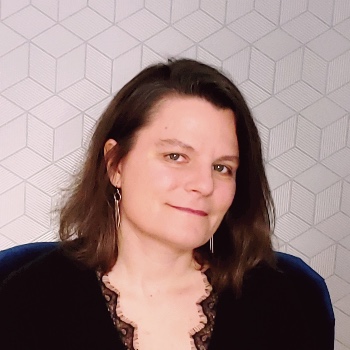 Eleni Polychronakos is a PhD candidate at Concordia University’s Department of Interdisciplinary Humanities. She is also a writer and teacher. She holds a Masters in Literature (McGill, 2000) and one in Journalism (UBC, 2007).

Her short fiction appears in The Puritan, The New Quarterly, The Bath Short Story Award Anthology 2019 and other literary publications. One of her stories was long-listed for the 2020 CBC Short Story Competition. From 2011 to 2015, she was a member of the collective that edits and publishes Roommagazine, a longstanding Canadian journal of feminist literature.

Eleni has worked as an intern producer on CBC Radio One’s The Sunday Edition. As a freelance journalist, she has reported and written articles for The Tyee,  rabble.ca, The New Westminster Newsleader, Kyoto Journal, etc.. She volunteered for two years as a co-producer on the The F-Word, a weekly feminist program on Co-op Radio Vancouver.

Under the supervision of Dr. Barbara Lorenzkowski, Eleni is currently writing her dissertation, which is tentatively titled “Girl’s Name: Seeking Narratives of Feminist Genealogy in Twentieth-Century Greece.” This SSHRC-funded research creation project uses oral history and literary criticism as both theory and methodology to collect, create, and analyze stories by and about women who came of age during Greece’s turbulent twentieth century. At its core is “Girl’s Name,” a novella based on family history and told in three inter-linked short stories that investigate major historical events from the intersection of political unrest, interpersonal relationships, and individual dreams and desires.

Eleni is a second-generation Greek-Canadian who grew up in Montreal. She spent more than a decade in Japan and Vancouver before returning to her hometown to pursue her PhD.