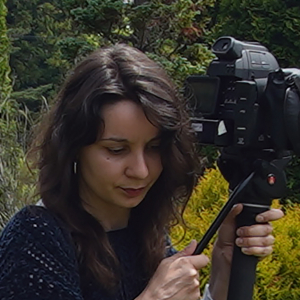 Clara Casian is a visual artist and filmmaker whose practice draws parallels between forgotten histories, and abandoned sites of memory. Themes include stringent issues of ecology, oral histories, deindustrialized sites, changes in habitats, and nuclear culture.

Her recent MRes degree at University of Westminster was developed in post-industrial environments in Barrow-in-Furness, UK, looking at the current ecological tensions between natural and man-made social environments. The project reflected on the history of Barrow in Furness, exploring 1900’s records from Piel Marine Laboratory and Fisheries, collected testimonies on forced industrialisation and its impacts on water pollution. Other projects include a two-year research project set in Japan, called ‘The Earth Asleep’, investigating the tragedy of the 2011 Japanese tsunami and Fukushima disaster, and ‘Birdsong-Stories from Pripyat’, made in response to the 1986 Chernobyl Power Plant disaster.

Nomination for student and community board members

In whose interest? Ethics and storytelling – Keynote par Shirley Gunn
Scroll to top