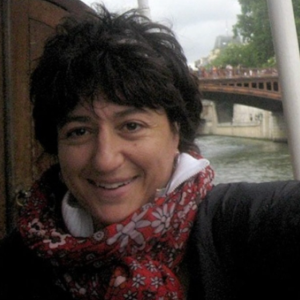 Born in Cordoba, Argentina, Carolina is an artist/writer/educator at Concordia University, Montreal in Quebec, Canada. Her award-winning thesis, now a book, The Semiotics of Che Guevara: Affective gateways (2015), present a series of encounters with the photograph, Guerrillero Heroico (1960) by Alberto Korda, its unique trajectory and endless renderings. There is only one image of Che Guevara amongst the many that were taken of him that has been chosen by people around the world as a kind of affective form of resistance: “Korda’s image has worked its way into languages around the world. It has become an alphanumeric symbol, a hieroglyph; an instant symbol. It mysteriously reappears whenever there’s a conflict. There isn’t anything else in history that serves in this way” (Lotz, 2007). Using this image as a heuristic, and presenting a final exhibit through a photo collage installation called Chenigma, Cambre explores vernacular visual expression asking: How do people produce and direct the visual space. How is the image a doing?

Her writing has been published in Visual Arts Research; Globalisation, Societies, and Education; and Review of Education, Pedagogy and Cultural Studies. Some of these publications reflect high-quality collaborations with scholars across the fields of visual anthropology, sociology and education. Her artistic work in the mediums of encaustic, photography and multi-media collage has been published as cover art for a number of magazines and books and been recognized in various competitions, including first prize at the 2010 Finger Lakes Environmental Film Festival (FLEFF) in New York with a photo-collage called “Beginnings.”