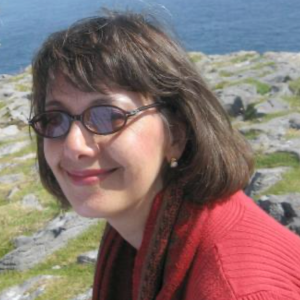 Sonya is an art historian who specializes in Irish art and applies an interdisciplinary approach: seeing art not simply through form and colour, but understanding how historical, religious, and social forces have driven the creative process. Oral history is a powerful means to gain insight into these forces. Sonya was born in Cali, Colombia and obtained a Master of Fine Arts degree in the Special Individualized Program (now INDI) at Concordia University, Montreal.  Sonya has presented her work at various conferences in Ireland and Canada.

The “Sheela Voices Project” was initiated by Sonya to capture different perspectives and reactions to the Sheela-na-gig – which is a medieval stone carving of a naked female figure with a pose that emphasizes her genitalia. These carvings are found on churches, castles, and monasteries and are mainly located in Ireland. The original meaning of the Sheela image remains unknown. In more recent times, however, it has been used as a feminist icon, talisman, fertility figure and focus of devotional rituals. This project seeks to capture the stories of people who have interacted with the Sheela-na-gig and especially those whose connection has a spiritual element. The stories thus provide an insight into the continuing power of the Sheela to engage, support and inspire.

The subject of my research is the Sheela-na-gig, a medieval stone carving of a naked figure with a pose that emphasizes her genitalia. This oral history project has collected a series of interviews with individuals or have interacted with the Sheela or been inspired by it: