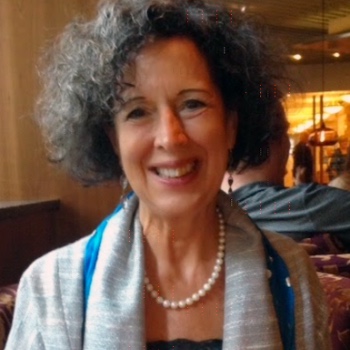 Dr. Gubbay Helfer earned a PhD in Jewish Studies and a Bachelor of Fine Arts in studio arts, both in 2006, from Concordia University. Since then, she has been a lecturer at Concordia, at the Université du Québec à Montréal and at the Université de Montréal. She has also been a postdoctoral fellow both at the Université de Montréal, where she completed an oral history of pioneers of Jewish/Catholic dialogue in Québec, and at COHDS for the Montreal Life Stories project, where she produced a Palestinian Canadian Life Stories pilot project and website, now in the hands of the participants as a Facebook page. Since then, Sharon has continued to work as a scholar-practitioner in the area of difficult dialogues and as a certified facilitator and trainer with the Compassionate Listening Project, leading workshops and practice groups. Current projects include Life Stories of Montreal Rabbis and Imams, recently initiated together with Azeddine Hmimsa of the Université de Montréal; and an exploration of the role of dialogue and listening at the Centre for Services in Reparative Justice.

“I have the great good fortune to do the work I love. Though details change from one project to another, the passions that propel me remain: First, a love of my fellow humans and a fierce desire to understand us, what we are made of and what drives us as we find our way across the landscape of history and heritage we are born into. Second, a fascination with why we continually set ourselves up against each other despite the clear fact of our shared humanity”.

Life Stories of Montreal Rabbis and Imams is an ongoing SSHRC-funded project in which I have carried out life story interviews with seven Montreal rabbis. I am working with a Muslim colleague who is interviewing imams and also with Ira Robinson of Concordia Jewish Studies and Patrice Brodeur of Islamic Studies at the Université de Montréal as P.I. and Coinvestigator.

The “Listening Caravan” is a project under development in conjunction with Jewish, Sikh and Muslim colleagues as a positive, dialogical response to Quebec’s Bill 21and its ongoing polarizing effects. We have recently partnered with the peacebuilding NGO Initiatives et changement and with Patrice Brodeur at the Université de Montréal as well as with Martin Bellerose, Director of the Institut de pastoral des dominicains.

Ongoing research/creation investigating texture and meaning of my complex heritage, bringing together personal archives, letters, dream diaries and multimedia drawings. The first in this series entitled “Keep Faith” was supported by COHDS in the context of Listening for Feminist Futures.

My work as a Compassionate Listening practice group leader and workshop facilitator is both a teaching offering and an opportunity to research/investigate the dynamics of difficult dialogues, including listening to oneself and others.