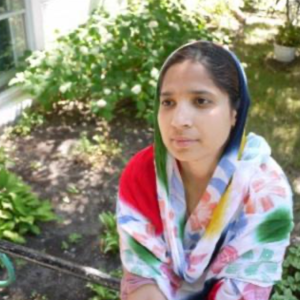 Rushdia Mehreen is a grassroots organizer based in Tiohtià:ke/Montreal, on unceded Kanien’kehá:ka territories. For over a decade she has been involved in various social justice struggles, including Palestine/anti-colonial solidarity, the Quebec student movement, migrant justice, collective care and anti-racist organizing. She is currently a college teacher in a precarious capacity and a PhD student at Université du Québec à Montréal. Over the past years, she has conducted research on the role of power dynamics in activism and has conducted interviews on life stories of activists and their experience of burnout. She is published in Briarpatch, Canadian Dimension, among other publications.

This project aims to interview and document life stories of anti-colonial and anti-racist activists who are first generation immigrants, also settlers, on the unceded indigenous land, in the Tionni’tiotiah:ke, Kanien’kehá:ka territory (so-called Montreal) and elsewhere on the Turtle Island. The first generation immigrants, particularly those who arrived here early in their lives, like herself, are subjected to a particular type of discrimination and racism that leaves them hanging between their two homes, two realities, and not being able to identify completely with one or the other. As such the contrast of “back home” and the current realities, submerged in the context of Canadian colonialism provides for in depth stories interlaced by anti-racist and anti-colonial struggles. As part of this project, Rushdia intends to interview at least five anti-racist, anti-colonial activists, chosen via a snowball sampling. These activists would also be those who are not already in the media, who mostly do behind the scenes work that is often not recognized. The interviews would be posted on various media and transcribed to be published in popular magazines and also submitted to academic journals.