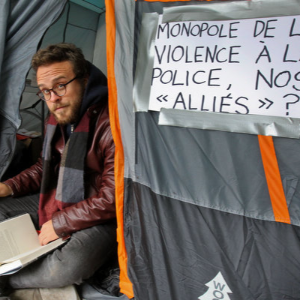 Fred Burrill is a postdoctoral researcher at Cape Breton University, having recently completed his PhD in History at Concordia. He is a Core Affiliate of Concordia’s Centre for Oral History and Digital Storytelling, and splits his time between Nova Scotia and Montreal. Fred grew up in rural Nova Scotia, in the heart of Eastern Canada’s lumber industry, and witnessed the dire consequences of deindustrialization on his community. In Montreal, he has been an active participant in a variety of grassroots struggles against capitalist exploitation, particularly in tenants’ movements and in migrant justice organizing. This political work has shaped his commitment to public-facing historical scholarship that challenges power structures and de-specializes the pursuit of serious historical inquiry. Fred enjoys watching baseball, hanging out with his cats, and zipping around Montreal on his scooter. He is skeptical about the political relevance of academia, but despite his best efforts continues to be an incorrigible bookworm.