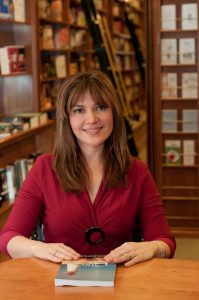 Adriana’s commitment to human rights and social justice is informed by her experience growing up in Colombia
amidst extreme political and social unrest and by her engagement in leadership positions around the world.

***
Adriana Cabrera Cleves is a museologist, researcher, instructor, curator, and consultant in human rights and social justice with extensive international experience.
She is a Ph.D. Candidate in Social and Cultural Analysis, Anthropology and Sociology, at Concordia University, Tiohtià:ke-Montréal, unceded Kanien’kehá:ka territory, (Canada). She holds an M.A. in Museology, Peace, and Reconciliation from the Amsterdam University of the Arts-Reinwardt Academy, (Netherlands). She also holds a Graduate specialization in Business Administration from the Victoria University, (Canada), a Graduate specialization in Cultural Management from the Universidad del Rosario, (Colombia), a Diploma in Civilisation française de la Sorbonne, (France), and a B.A. in Social Communication and Journalism from the Universidad Javeriana, (Colombia).

In her 20 years of work in the museum field, Adriana created and directed the Department of Communications at the National Museum of Colombia and served as Associate Vice-President of Cultural Programs at the Museum of Latin American Art in Los Angeles, California. In Canada, she also worked at the Royal British Columbia Museum; collaborated with the first international exhibition of the Museum of Memory and Human Rights of Chile in Montreal Lieu de la mémoire : un musée contre l’oubli; curated the Temporary Museum of Memory and Solidarity with the Colombian community in Quebec (COHDS); co-curated the exhibition Images and Power: Black Women; conducted research in social justice and human rights exhibitions at the McCord Museum; and she has provided consulting services to the Montreal Holocaust Museum.

Additionally, Adriana taught exhibitions and public programs development at the University of San Diego, (USA), and she was instructor of Leadership Workshops at the Graduate Professional Skills Program, Concordia University, (Canada).
Early in her research career, Adriana served as radio news writer and presenter for the Radiodifusora Nacional program of the Council of Human Right of the Presidency of Colombia and collaborated as a researcher at the International School of Peace Negotiations in Amsterdam. In 2000, she presented her M.A. research project in relation to memory and identity construction titled Museology of Peace and Reconciliation for Colombia through Indigenous Intangible Spiritual Heritage, with Dr. Peter van Mensch as research adviser, at the international museology course The Role of Museums in the Development of Peace and Tolerance, in Dubrovnik, Croatia, organized by Dr. Martin Segger (University of Victoria) and Dr. Ivo Maroević (University of Zagreb).
In 2002, her work was presented as cutting-edge research at the International Council of Museums (ICOM) in Paris, by Dr. Piet Pouw, former ICOM Interim Secretary-General of ICOM. She has since continued her research in connection with community building, social justice, human rights, and Indigenous Peoples.

In 2013, Adriana joined the research group of Human Rights Museology directed by Dr. Jennifer Carter at the Université du Québec à Montréal, where she collaborated in researching the Museum of Memory and Human Rights of Chile and the Canadian Museum of Human Rights. In 2017, at the Concordia University’s Ethnography Lab, she also co-initiated a Working Group devoted to researching Human Rights. The research group’s first project was a study of the ethnography of the McCord Museum’s approach of Human Rights in the exhibition Shalom Montreal. She has also participated as author and co-author of various publications and lectured at international conferences.

Adriana is the founder and current President of the Cabrera Cleves & Atateken Foundation. She is committed to philanthropic work.