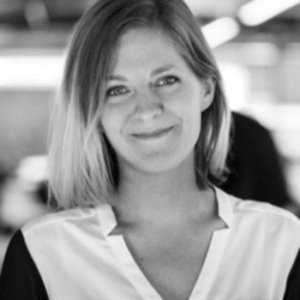 Eve-Lyne Cayouette Ashby has over 10 years of experience in museology, oral history and heritage interpretation. From 2009 to 2016, she has played an important role at the Centre for Oral History and Digital Storytelling first as Project Coordinator (Montreal Life Stories) and then both as the Centre’s Associate Director and as Director of Research and Curation for the Canada Research Chair in Oral History. Within these roles, Eve-Lyne coordinated major research projects, contributed to developing the Centre, and produced exhibitions and publications.

Eve-Lyne holds a master’s degree in Museology and a bachelor’s degree in Anthropology from the University of Montreal (Canada) with an undergraduate degree in Heritage Studies from Lille 1 University (France). She has also developed an extensive professional expertise in oral history.

As curator, Eve-Lyne has participated in the production of many exhibitions and other productions, most notably: “We Are Here”, a major temporary exhibition at the Centre d’histoire de Montréal in 2012-2013; “Canal”, an audio-walk around the Lachine Canal in 2013; “Correspondances NDG” at the Maison de la culture Notre-Dame-de-Grâce in 2014; and the Bank of Canada Museum’s new permanent exhibition. Eve-Lyne joined GSM Project’s team in 2015. She is currently based in Dubai (UAE) where she participates in the development of a new museum as Head of Content Curation.