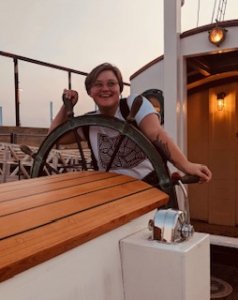 Amanda Marie was born and raised in Washington State, and has lived all over the United States- most recently in Brooklyn, New York. As a third-generation bartender, and first-generation college student, they are curious about the implications and relationships that develop through tipped work and the ways that tipped labor exists on the border of the formal an informal economies. After a strange, varied, and mostly interesting career in both the coffee and spirits industries, they recently graduated with a Bachelor’s of Arts in History from Hunter College in New York City where their studies mainly focused on the history of the Americas during the 19th and 20th century. Upon graduation, their department awarded them the Paula Kaplowitz Enns memorial scholarship recipient for exceptional undergraduate student.