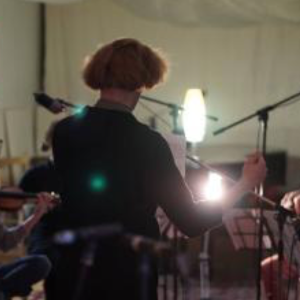 Jad Orphée Chami is a Canadian-Lebanese composer, performer and multidisciplinary artist based in Paris that has notably worked on the original soundtrack of the feature film Antigone by Sophie Deraspe, awarded Best Canadian Feature Film at the Toronto International Film Festival (TIFF) and chosen as Canada’s official selection for the 92nd Oscars.

Born in Beirut in 1998 into a family of secular artists and activists, he began playing the piano at the age of 4 and studied classical performance at the conservatory in the Mediterranean city. His debut as a composer was at the age of 15 for the experimental documentary staged piece Umbilical Cord exploring the subject of war-induced forced separation. Shortly after, he moved with his family to Montreal where he started developing his interest for cinema, contemporary music and interdisciplinary research methods in aesthetics and performance studies.

During his studies at Concordia University’s faculty of fine arts, he composed and directed a series of multidisciplinary pieces and notably collaborated on experimental and animation short-films such as Coping (Official Selection in the 18th Sommets du Cinéma d’Animation). In early 2018, he collaborated as a composer within artist-researcher Dr. Luis Carlos Sotelo Castro’s project exploring testimony-based performances. In late 2018, he composed and performed an improvisation-based suite for Pierre-Marc Ouellette’s piece Marges de manoeuvre to be performed in collaboration with the Contemporary Dance School of Montreal in May 2019 at Tangente.

A recent BFA in Music graduate with distinction from Concordia University, he is furthering his interest in research-creation which he is presently working on in Paris at the School for Advanced Studies in the Social Sciences under the supervision of Dr. Clément Canonne (IRCAM) on the question of memory and the role of music in the performance of testimonies in the context of oral history performance. He is currently working on the oral histories of the families of the disappeared during the Lebanese civil war. He is also interested in the cross-cutting issues of art and its aesthetics/ethics contemporary conflicts.