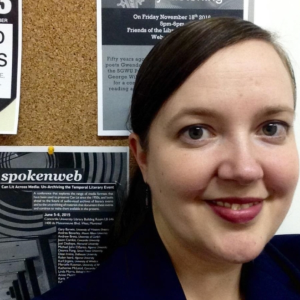 Dr. McLeod researches sound, archives and performance in Canadian Literature. Her current projects consist of two book manuscripts: a collection of essays, co-edited with Jason Camlot, called Un-Archiving the Literary Event: CanLit Across Media; and her book manuscript, Broadcasting CanLit, in which she examines the CBC radio archives as literary archives, specifically readings by Canadian female poets on the radio during the 1950s-1970s. She began these projects as a SSHRC-funded TransCanada Institute Postdoctoral Fellow at the University of Guelph and continued this project as a postdoctoral fellow with SpokenWeb, Concordia University. She received her doctorate from the University of Toronto, where she wrote about the poetry and performance through frameworks of the avant-garde, improvisation, and inter-cultural listening. Excerpts from this work have been published in articles in Mosaic, Open Letter, and The Canadian Theatre Review–and her article on Clarke’s jazz opera was re-published in Africadian Atlantic: Essays on George Elliott Clarke. Her most recent publications include a contribution to the book Public Poetics: Critical Issues in Canadian Poetry and Poetics and an essay that is the first scholarly essay published on Robert Bringhurst’s 1986 contrapuntal poem, “The Blue Roofs of Japan.” She tweets from @kathmcleod and curates a blog–wherepoetsread.ca–with a list of Montreal poetry readings.