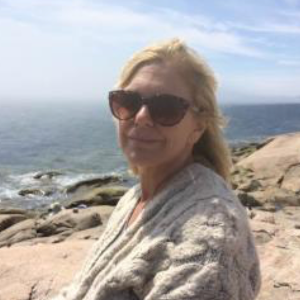 Cynthia Van Frank’s current practice of primarily oil painting focuses on a response to the beauty of urban and rural landscapes. Encounters with colour, light, or surprising juxtapositions within an environment stimulate her senses. She wants to capture that moment. The rural landscape series reflects her love of nature; these are often done from memory. The St. Henri paintings are observational, and are about shifting qualities of light in a familiar and changing environment. Her desire is to convey a sense of movement and the passage of time.

She sees her body of work as an on-going exploration. She often revisits themes of self-discovery, with an emphasis on play and the creative process. Personal histories are mined in an effort to reach universal ideas of how we interact with the self, others and our natural or manmade environments. In the series based on the Holocaust, she grapples with the idea of the collective memory and her second generation survivor’s interpretation of events. Using graphite and an eraser on wooden supports, she attempts to directly confront the meandering way of the subconscious memory.

Cynthia graduated from Concordia‘s BFA program with distinction in studio arts and later studied painting at the New York Studio School. After graduation, she received a 2-year grant, Le Fonds Pour la Formation Chercheurs et L’Aide à la Recherche. This enabled her to study painting with her mentor, the late John Fox, whose support and guidance greatly influenced her work.

Her art has been purchased by both private, corporate, and public collections including Le Musée du Quebec, La Collection Prêt d’Oeuvres d’Arts.