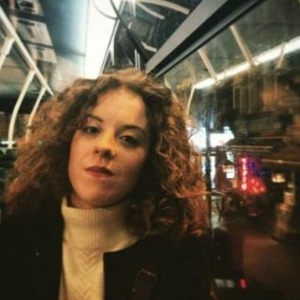 In the past five years my experiences as student and researcher has been mainly – but not exclusively – focused on the relationship between memory and history. While studying at the University of Rome, I wrote a paper on the experience of consciousness-raising groups (“gruppi di autocoscienza”) in the Italian feminist movement by using oral history interviews I had collected together with two other students of my programme. For my bachelor’s thesis, I researched on the memory of 1968 among daughters and sons of Italian Student Movement activists. My thesis examined the significance and influence upon subsequent generations of the set of values and moral imperatives that parents involved in the protests of ’68 transmitted to their children. Although mastering the existent historiography and sociological documentation, I worked primarily on oral history interviews by both conducting and analysing them. After my graduation, I had been invited to join an academic research group devoted to the subject of my thesis and coordinated by my tutor. It has been in this context of research that I explored different approaches to history and memory. The most challenging and intriguing has come from the study of corpus linguistic, which provided me with a new perspective on the analysis of interviews. Working on words has enabled me to disclose unnoticed historical significances.

Interested in understanding the facets of memory and its cultural as well as social representations, I decided to move to London, considering it as an opportunity to differentiate my approach to historical writing and research. In graduate school, I deepened such interests by studying the historical framing and reframing of the memory of two mass killings carried out by the Nazis in Italy. Taking into consideration a sociohistorical approach, mostly of French and British Marxist tradition, and combining it with the analysis of political speeches, oral history interviews and newspapers’ articles, my dissertation examined how the collective memory of the massacres had been configured and transformed in the community affected by the massacres – the victims – and in the public discourse. At the London School of Economics, I had also extended my interest in corpus linguistic by writing a research paper, entitled “ Historical research in the era of the digital humanities: analysis twenty years of Italo-American relations through corpus linguistic”. Building up on the research work conducted in the context of Columbia University’s History Lab project coordinated by Matthew Connelly, I made use of corpus linguistic to engage in an in-depth analysis of the Italy’s foreign relations with the U.S. throughout the 1950s and 1970s. In June, I have presented and discussed this paper at the ASMI postgraduate summer school held at the University of Reading (UK). Currently I am working on two oral history collaborative projects and I am studying journalism. Both opportunities are helping me in maintaining a current view on the international as well as national cultural debate – which I firmly believe is essential to fully understand the character of present and its connections with the past – and in nurturing a long-standing passion for writing and collecting memories. Since the first years of University, I have always tried to maintain a dialectic approach between researching on memory and history in academia and collecting voices, telling stories, and analysing current phenomena by volunteering for oral history projects and working as journalist for some Italian websites and newspapers.

Currently I am collaborating with the Archive of Migrant Memories in Rome. As oral history researcher, I am supporting the AMM team by editing, transcribing, and collecting interviews. In other words, I am collaborating with the archive in preserving the voices and stories of those, migrants and refugees, who left everything behind to come to Europe.