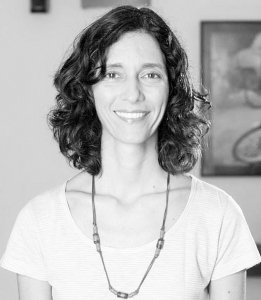 Mayra Jucá is a multimedia creator and an interdisciplinary researcher connected to the fields of History, Social Communications and Film Studies. She is a PhD student at CPDOC – Center for The Research and Documentation of Contemporary Brazilian History, at Fundação Getúlio Vargas (FGV) in Rio de Janeiro, which is a reference for Oral History in Brazil. In CPDOC, she also teaches Digital media and the new perspectives on documentary film and is an affiliate member of the Visual Culture Lab.

As a visitor researcher at the Concordia University’s Centre for Oral History and Digital Storytelling, in Montreal, she is looking for new methodological approaches for her PhD project on the relevance of a group of amateur, Super-8 short films produced in the ’70s during the dictatorship in Brazil. In this research, she uses oral history to investigate the stories outside the films and the political narratives that surround them. The internship is financed by Coordenação de Aperfeiçoamento de Pessoal de Nível Superior – Brasil (CAPES).

Mayra is the co-author of the book « Maria Muniz, a Sherazade do rádio » (Maria Muniz, the radio Sheherazade) a product of 20 hours of life story interviews she held with one of the first female radio soap opera scriptwriters in Brazil, active during the ’50s. In her Master thesis she analyzed the self-narratives of favela residents acting as reporters in a collaborative media platform focusing on Brazilian peripheries. Most recently (2017-2020) she has been studying and writing on digital interactive narratives. She directed two short films and one long documentary film and produced two collaborative webdocs.