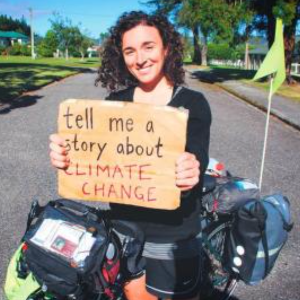 Devi Lockwood is a poet / touring cyclist / storyteller traveling the world (mostly by bicycle) to collect 1,001 stories from people she meets about water & climate change. Devi’s journey began with the September 21, 2014 People’s Climate March in NYC. To date she has collected over 600 stories (audio recordings) in the USA, Fiji, Tuvalu, New Zealand, Australia, Thailand, Laos, Cambodia, Qatar, Morocco, and the U.K. In November 2016 she attended the U.N. climate talks in Morocco as a youth delegate with SustainUS.

She is working to create a map on a website where you can click on a point and listen to a story someone has told her from that place.